I assume that a lot of people have taken a break from Facebook and texting and emailing and making phone calls for a while. That is the only explanation I can surmise after the silence we experienced today.

Looking back on my Facebook posts in September, I admit that I have only myself to blame. Prior to Hurricane Florence hitting our state last month, I posted a series of photos, beginning with “the calm before the storm,” and ending with a photo after she had left town.

Today, I was awoken at 4 am by the wind of a much more powerful storm—Hurricane Michael. I slept through the tornado warnings so I did not have to stress about where to hide.

By no means did we experience the path of destruction which Florida and Georgia saw when Michael invaded our southern neighbors. However, I thought I would get inquiries from more than just two friends.  Just two!!! FYI, we experienced more rain and wind today than during Florence. We will have some cleanup to do.

I saw the weather maps on the national news, and it was quite clear that the path of the storm went right through Columbia, SC. But I was too busy moving my furniture indoors and watching the water being driven up the hill to think about posting on Facebook.

I assumed someone would ask about our welfare. 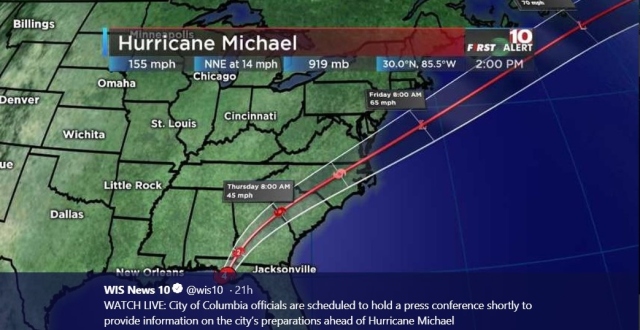 Now I know the names of the two people to add to my will.

Another natural disaster has wreaked havoc on millions of people this week. This time, it is the horrific floods in Houston which have affected strangers as well as several members of our family. As I mentioned previously, “Mother Nature can bring us beautiful sunrises and sunsets, breathtaking mountain views, and flowers of every color. But she is not always our friend.”

Unlike the flooding we experienced back in 1999 when Hurricane Floyd invaded our home in New Jersey, social media and television during Hurricane Harvey was enormously helpful in locating people trapped in their homes. A tweet by a desperate man seeking help for his wife who was in labor was noticed by two nearby rescuers in a pick-up truck. The Houston police department was asking for boats on Twitter, and their requests were answered. You want to send money to the Red Cross, just text REDCROSS to 90999, and ten dollars will be donated to Red Cross disaster relief. How cool is that!

Fortunately, our Houston family members did not lose power—only water—but we knew they were safe because of texts from their phones and posts on Facebook.

During that storm in 1999, when Floyd dumped 10 inches of rain on us, we sent out a call for help for a generator from our friend, Don, after staying up all night bailing out the basement. Then we waited.

Nobody texted or tweeted or posted our calls for help back then. When our telephones went dead, we could do nothing but wait until Don came, so we just bailed, rested, bailed, rested. After this experience, Dad installed back-up battery-operated pumps in our basement. He forever referred to that house as Water World.

Our water problem in New Jersey back in 1999, along with the South Carolina Flood of 2015, was just minor inconveniences. We did not lose our homes, and both storms were truly just small nuisances compared to the suffering witnessed by those who lost everything during Katrina and Harvey. We have a small anecdote to remember but nothing really very noteworthy.

We were truly fortunate.

With Jamie coming for a visit, I started thinking about some of our past hotel stays. I found a letter written by her during the The Summer of Awesome. Apparently, thirteen-year-old Jamie was happy with the accommodations, but not the service. I found this letter which she wrote, but never sent.

At breakfast, it took forever 4 our food to come. When it came, it was missing, but it wasn’t missing from our bill (u still charged us 4 it). Plus it took ages 4 my daddy 2 get some coffee, so try 2 improve on this . By the way, your crab bisque soup is FANTASTIC! Have a great day! (Only if u improve your service)— A CONCERNED CITIZEN.

It is obvious from this letter that we had been guests at hotels with better customer service, yet despite her displeasure, Jamie still found something nice to say. Yet I believe if we had stayed at this hotel after our visit to the Outer Banks, that letter may never have been written. I am positive none of you will ever forget that place.

We had been invited by Aunt El to visit them at the beach house they had rented with Shannon, but our plans were in jeopardy because of Hurricane Alex. I tracked its path during the days preceding our trip, and when I awoke the morning we planned to leave our Chapel Hill house, all indications were that the storm was moving out to sea. So we all hopped in our car (Dad wasn’t with us), confident that all would be calm when we neared the beach four hours later.

I had never been to the OBX, so I did not realize we would be crossing several bridges. As you know, my bridge fears have just recently subsided. If I had a crystal ball, we would never have left our house.

As we got closer to the coast, I began to doubt the forecast that Alex had left the room. The sky was gray and ominous looking, and the wind was increasing as was the rain. Hey, I trusted weather.com and my local weatherman!

If memory serves me correctly, we crossed more than one bridge before I announced that we could go no further. Although the bridges were close to the water (So if we drove off, we would have survived the plunge to the murky waters below us.), that also was the problem. The water we crossed appeared to be close to coming onto the bridge.

We stopped at a tacky souvenir/gas station where I asked for directions to the nearest hotel. “There is one right around back, ma’am,” I was told. Those were the days when being called ma’am was an insult, but I was too frightened with the weather and relieved that I didn’t have to drive further to get angry over being “ma’amed.”

Once we opened the door to our room, I wondered if it would have been better to face the storm. The room was so creepy that I was uncomfortable even using the bathroom. With nowhere to sit but the bed, we climbed on top of the bed fully clothed, and took out a deck of cards. We continued to monitor the weather, because I was determined not to spend the night at the “roach motel.” I don’t think we saw any bugs, but I am positive they were lurking about.

Thank goodness Alex did turn out to sea and we were able to continue our trip to the beach. We all got our “I survived Hurricane Alex” tee shirts. Do any of you still have yours?

Mother Nature can bring us beautiful sunrises and sunsets, breathtaking mountain views, and flowers of every color. But she is not always our friend. I remember paralyzing blizzards and ice storms whose dazzle was breathtaking, yet dangerous. You were excited to have a day off from school. I was glad to have you home for some snow fun, except for the year when you were all home for an entire week. That was awful!

Hurricane Floyd came to town in 1999 and rendered us without power for days. Dad and I sent all of you to Grandma and Grandpa’s house to sleep while the two of us stayed behind. We slept in the basement to bail the water when the sump pump could not keep pace with the infiltration of water into the house.  As was our tradition when we lost power, we went to Boston Market for dinner. But the effects were temporary and life went on for us and all of our friends.

Jamie returned to New Jersey in 2011 and had to endure the wrath of hurricanes Irene and Sandy. With so many of our friends and family in the Garden State, my heart was with them all as they lived through both storms.

Now we are in South Carolina and it is not a hurricane, but the related moisture that brought in hurricane-like rain without the corresponding wind. Kelly had a wedding to shoot on Saturday, and while the brunt of the storm did not arrive until she was safely home that night, I still worried for her safety, knowing she would be traveling unfamiliar roads alone in the dark. Once you are a parent, you cannot turn off the concern. It is just impossible!

We have not been impacted by this storm as much as Floyd. Our pantry, refrigerator and freezer is always full; you laugh at us for that all the time. We bought extra water, boiled it as instructed, and cautiously stayed inside as we watched others venture outside ignoring the warnings to stay safe. Dad has been worrying about the safety of our nearby dam.

The news reports have been heartbreaking as we watch the floodwaters rise, the dams break, and see people losing their belongings and their homes.  Unlike Floyd, I fear that life will not go back to normal in the foreseeable future. I am saddened by what I see but hopeful as I watch the kindness of strangers and hope that our friends in New Jersey do not blame the legislators from South Carolina who voted “NO” for Sandy relief. I was embarrassed, saddened and ashamed when that happened here and thought, “When that happens here someday (and I knew it would), I hope we are not punished by the stupidity of a few.” I have confidence that this will not happen. I believe that most people–the cashier at the store, the police officer, teacher, and the stranger that I wave to as I pass them on the street–are compassionate.

Bryce is too young to understand how lucky he is. Our governor has a press conference, and the boredom puts him to sleep. He is forced to stay inside, and when the rain stops briefly, he is taken outside and says, “yea, outside!”

For the most part, I love my new state and hope we can rebuild. But for now, I am just sad.