I have great difficulty doing anything mechanical, and Dad will attest to the fact that my definition of “mechanical” is quite broad. “Mechanical” may be as basic as opening a bottle with a childproof cap or figuring out how to stream a television show.

One day Lily wanted to watch Blippi on YouTube in the pink bedroom, so I followed her there and was faced with great frustration working the Roku. I managed to turn on the television but just could not figure out how to get to YouTube. I pushed one button after another, making certain that the remote was pointed perfectly toward the TV. Finally, finally, finally, I did it, and Lily cheered: “You did it, Grandma!! I know you could!” I should have just given her the remote from the start.

Last week I spent a few nights at my sister’s house while she was away. She left me two videos. One showed how to make a pot of coffee (easy thank goodness) while the other explained how to work her Smart TV. (One needs to be both smart and not mechanically-challenged.)

Again, there were two remotes involved. Just like before, I was able to turn on the television, but I could not figure out how to get the Guide to appear. This was mentioned in the tutorial but not shown, so I was stuck watching the last channel Aunt Ar had watched (MSNBC, not FOX thank goodness!)

Luckily I had loaded my local Spectrum APP on my tablet, so I was able to watch other networks until 9:00, when I switched on the big television and settled down with my glass of wine to watch Rachel Maddow.  I confess that after that stressful experience I had two glasses that night.

If only I had a three-year old to help me! Well, I have many other talents, as long as mechanics is not involved. 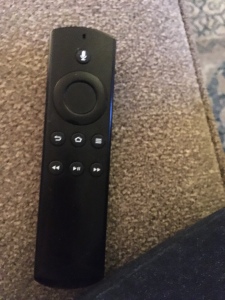